An Ode to Coffee 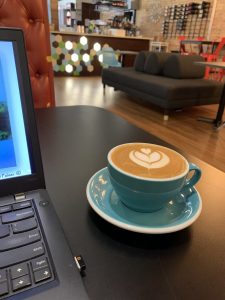 Perimenopausal hormone chaos has taken my beloved coffee from me. About two years ago I had to admit that the rushing heartbeat and strains to catch a full breath were no longer bodily sensations I could ignore and simply “deal with.” Caffeine was going to give me a heart attack.

Now I’m left feeling angry, ejected from the club I was so committed to joining. I drink decaf to pretend I’m still in the tribe, but my drinking is sad, like an alcoholic sipping grape juice from a wine glass. I identify as a coffee drinker and I now drift like a ghost through the coffee world.

Even more than the identity, I miss the surge of creative energy that coffee delivers. Coffee is the vehicle that the muse rides to charge my system. Without the caffeine, the synapses in my brain don’t fire. I have to pull the creativity through a molasseslike cloud where it finally arrives sticky and half-baked.

My second novel was birthed at Vic’s coffee shop on Broadway in Boulder, Colorado, where I’d arrive by 6:45 each morning, treating myself to a latte in exchange for bringing myself to work. We had a deal, me and coffee, and the deal worked great.

My taste for coffee began in my 1970s childhood when my dad would let me eat spoonfuls of his Breyer’s coffee ice cream at night, tucked beside him on the couch after dinner. In the mornings I would dunk Stella D’Oro breakfast treats in my mom’s morning cup, sucking the delightful flavor, anxious to grow up and have a cup of my own. A cup of one’s own …

When I was 12 my stepmother took me to a real coffee shop for the first time and ordered a cappuccino for me. We were somewhere in Lincoln Park, a Chicago neighborhood I remember as being hipster before hipster was a thing and much more funky than it is today. This was circa 1984, a few years ago now. That coffee shop experience unlocked a new world of “hip” (as did the record stores and vintage clothing shops we’d frequent), all so very, very different from my rural life in the cornfields two hours south of the city. I was desperate to belong. I yearned for more and more of the urban environment. Coffee shops are still my happy place and when paired with a bookstore, I’m in heaven. I also choose urban over rural (I moved back to Chicago from Colorado) but that is another post for another day.

For years, coffee was the afternoon treat that would jolt me through a late-afternoon slump. My after-lunch cup of coffee became a normal and coveted part of my corporate routine. Some of my favorite memories are when my employee Amy and I would have a walking meeting to Starbucks, relishing the Colorado sunshine along the groomed paths of our manicured office park, sipping our iced coffee on the way back to the office, jolted into a few more hours of productivity before it was time to go home. The brainstorming bursts were exceptional. My vision of building my own business was birthed on one of those walks.

I’m mad at menopause for taking my drug away from me. I was content in my addiction.

At the first sign of pregnancy 13 years ago, my hormones went into overdrive and my tolerance for caffeine went sideways. First, I switched to half-caf, then a-third-caf until finally I had to walk away.

So now I embrace black tea and have a cup after lunch each day. While I’m enjoying this ritual, there are days when I really want a mocha or an iced coffee. Sometimes I splurge at Starbucks, in a Target, on a Saturday afternoon. I order decaf. It’s just not the same. I miss the rush. Decaf is playing at coffee. I keep the game going anyway and religiously brew a cup of decaf every morning. Sometimes I push it and make two cups, but inevitably my heart starts to race because caffeine, even in small doses, is still having it’s way with me.

I’m told that by my mid-50s, when my body has calmed down, I’ll likely be able to return to coffee. As I sit here on the cusp of that new decade, its middle feels far away. So for now I push on, forcing the creativity to emerge regardless of how hard it is to pull through the cloud of molasses and pray that one day I’ll get my beloved back again.