For the Love of Inanimate Things

On a warm day in May with the car windows down and sunroof open, I was driving along, feeling guilty for snagging a last-minute opening to get my nails done—instead of helping with a PTO event. I hadn’t canceled with the school, I had called to ask if I could be late, but still, the guilt was there. I said I was going to do something, but I took a detour to do something else.

I navigated streets I rarely travel, finding my way from the nail salon to my daughter’s school. At a backed-up intersection, I came to a stop and did that thing many of us do where we assess the line of cars and make a judgment call on whether we have clearance to turn. The cars going in the opposite direction didn’t have a stop sign yet they were also not going anywhere, backed up by a red light down the street. I edged into the intersection and began my turn through traffic.

How I missed a Pace city bus, I have no idea. It honestly felt like it wasn’t there at all and then, as if from a dream, it was suddenly right behind me.

I knew I had made a bad call when I heard a cry coming from the woman in the SUV in the adjacent lane. Her scream was pure judgment directed fully at me. How dare I do this.

And then the bus pushed me into her, like the most intense game of bumper cars you could ever imagine. Throughout those moments, somehow, I remained calm, knowing that everything would be what it would be. Maybe it was that sense of calm that kept my body loose and thus injury-free?

Our driver-side doors were now parallel. Cars edged past me, dipping onto the shoulder and, in their rush to pass, knocking off shards of my front bumper and who knows what else. Like ravens descending on a carcass, pieces of my vehicle were swooped up and taken away. My car of fifteen years, this vehicle that I deeply loved, was being ripped apart—and pieces of me were ripping too.

The impacted driver called 911. I heard the operator’s questions through her phone.

“Are you trapped in your vehicle?” She answered yes. Our doors were parallel, but she was not trapped. Both of us could exit through our passenger doors, as I had just done to move some debris out of the line of traffic. As damaged as it was, I knew I could likely drive my car away from hers, clearing both our driver-side doors, but I was waiting until an officer arrived to document the scene.

As we sat there waiting for the firemen and police to arrive, the woman begin making calls. First to an appointment she would miss, then perhaps to a spouse. Her rage continued with each call she made, so I built a bubble. I imagined a protective shield guarding me from her energy. There I was, my car likely totaled, unsure at that point if I was injured and my greatest fear was absorbing this woman’s negativity. I wouldn’t let it in. I couldn’t take it on.

The fire department arrived and approached us with the jaws of life, taken aback when they realized neither of us were trapped in our vehicles. Her anger escalated a bad situation into something over the top. At some point an officer showed up. The firemen left, confused as to why they had been summoned.

The officer asked me for my license and insurance card, then had me move my car to a church parking lot across the street, where I waited. My husband arrived and cleaned out my vehicle, the reusable shopping bags and the tattered dog blanket that covered the back seat, the face masks and boxes of Tic Tacs stuffed into the glove compartment, the I-Pass highway transponder and my garage door opener. Every last pen, hair tie, and paper napkin were removed as if I were preparing to have the car professionally detailed, not sent off to the junkyard. I sent my husband home, telling him I’d call when I was ready to be picked up. I sat in my car saying a long, slow goodbye.

The officer took hours to detail the scene, speak with the bus driver, and the woman whose SUV I hit. All the while I waited. And breathed.

Finally, the officer came over to me. I braced myself for my interrogation, for my punishment. “I’m not ticketing you, ma’am,” he said handing me my insurance card and license. How was this possible? I was clearly in the wrong, having turned into traffic when I wasn’t in the right. I gambled and my gamble did not pay off. There were consequences for these things. Weren’t there?

Sensing my disbelief, he continued, “Accidents happen. It’s my discretion to do so, and I’m not ticketing you.” His message delivered with the nonchalance that comes on a late Friday afternoon after what was likely a very long week.

It’s become clear that this accident wasn’t a karmic punishment. Instead, it was about me letting go of my past, about releasing a vehicle that I deeply loved. It was about moving on.

I had been talking about trading in my 2006 Toyota Matrix for years but could never bring myself to do it. I poured money into repairs, justifying the practicality of paying for maintenance over the insanity of the current new-car market. It was the vehicle we drove to bring our daughter home from the hospital. We bought it to be my Mom car, and it was exactly that for fourteen years. Covered in Colorado bumper stickers, my Matrix was a tie to another life, a past identity, a tether to my former life in Colorado. 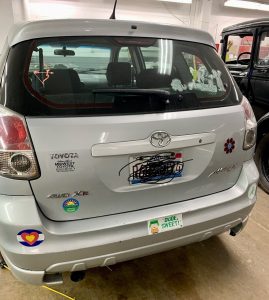 Since I wasn’t able to release it on my own, the universe literally pushed me to do it by summoning the bus that appeared that day behind me, destroying my vehicle in the process. From what I observed, both the bus driver and the SUV driver were uninjured, and while there was vehicle damage, there didn’t appear to be greater consequences. No tickets were issued. The trauma was in the letting go, shedding tears over my car, over what it represented.

My Matrix could never take me back to a world I left behind. The timing of the accident was ironic, coming just a week after my husband and I discussed the pros and cons of moving back to Colorado. We can’t go back to the Colorado we pine for, one where it’s 1995 and we’re in our twenties and the world is a very, very different place. You can’t go back. We’re not supposed to go that way.

When we bring consciousness into high drama or trauma situations, we can see the lessons and patterns, and understand that everything is indeed a lesson. In this case, I wasn’t injured nor was anyone else. Heck, I wasn’t even ticketed. This was about letting go and moving on and understanding when our love for objects must be released.

Weeks later, after the goodbyes were said, I began my search for a new vehicle. After negotiating a tough car market, I settled on a make/model that interested me and, more importantly, was in stock and available.

It was the end of month, so I had the sales gods on my side. The dealership wanted a sale to hit its monthly quota more than it wanted a high sale price. As I explained that I needed to go home and think about it, the manager came over and began bargaining. Eventually, he tossed out a number I couldn’t refuse, approximately $5,000 lower than what I was seeing online. Car inventories are low. No one is negotiating deals these days. Why was this happening?

Clearly, the universe was insisting that I take this car home. When I sat down with the finance representative at the dealership, he looked me in the eye and asked how on earth I just did that.

“No one is getting deals,” he said. “I’ve been watching you for the last hour. How did you get the price this low?” I said that I asked the universe for help and while I’m not even sure if I really did, the words flew out of my mouth with such strong conviction that perhaps my sub-conscious had. He smiled and said, “And that’s the way it works.” 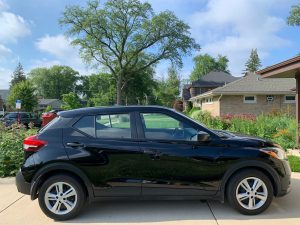 I’m quickly falling in love with my black go-kart. My neighbor asked me what I was going to name the new car. I told her I don’t name cars. She pressed me so I said, “I guess it’s a Fresh Start.” 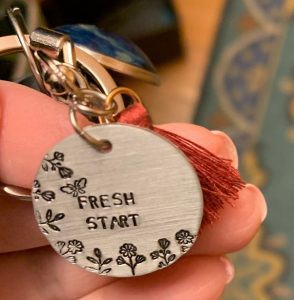