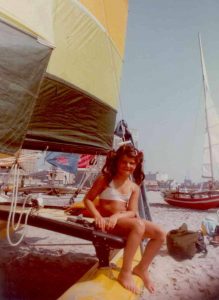 Ten years ago, I boarded a one-way flight from Colorado to Chicago with my three-year-old daughter in tow and my aging black cat in a carrier. My husband and father-in-law would be heading out the next day, driving our two cars loaded with plants, personal items, our dog and our albino African clawed frog, the latter an attempt at not leaving any of our life behind. (Unfortunately, the frog did not survive the journey.)

We said goodbye to our twenty-year life in Boulder and returned to Chicago. Our family’s next adventure was about to begin.

We each had to say goodbye to Colorado on our own. I left it to him to greet the movers and empty the house.

On the anniversary of the move a few weeks ago, my husband shared that the night of the move, as he and his dad were in a motel in Boulder before an early-morning start on the drive east, he remembered my wedding dress, hermetically sealed in a large box and still in the rafters of our garage. He had to go back to the house after saying a final goodbye, break into the garage, and find a place to shove the large box into the already-packed car.

Ten years in, Park Ridge is now home. Our Colorado life takes on more and more of a dreamlike quality as the years pass.

The notion of “home” has always fascinated me. When people ask “Where are you from?” I honestly don’t know how to answer that without inappropriately oversharing. I’m wondering:

The places attached to each of those questions are very different. I am from the sea. Formed myself in the cornfields. Spread my wings in the mountains. And came home to nest in the city.

People often ask “Don’t you miss it? Colorado is so beautiful!” It is fantastically beautiful. I miss it terribly. Also: I am ridiculously happy to be here now. And that, my friends, is real life. What I really miss though, if we’re being super real, is 1995 Colorado. I miss Boulder before the dot-com boom and subsequent bust. I miss the innocent days of hippie head shops on Pearl Street. I miss the days before Prana became an anchor on Pearl Street Mall, before our dive bar Mexican restaurant, Juanita’s, closed. Juanita’s was the place where we got engaged, where we had our last meal before our daughter came into the world, where we had our first restaurant meal as new parents. When Juanita’s closed, we joked that maybe it was time to move. A year later we did. Places change and it’s important to recognize when it’s time to move on.

Funny, neither Colorado nor Illinois are actually my “real” home. I was born and raised on the Jersey shore. I spent my childhood taking naps on a blanket under an umbrella as the ocean served as my sound machine. I miss the east coast accents, subs, seafood and Tastykakes. Jersey is my soul home.

A piece of my heart is in all the places I lived, even Charleston, Illinois, where I spent my college years, becoming an independent adult and finding myself.

The first year of our move to Park Ridge was full of grief and isolation. We were on a new adventure but felt so very alone. At three weeks post-move, my daughter needed to be seen by a pediatrician for an ear infection. We couldn’t get an appointment because we were not an established patient anywhere and it would take six months to get a new patient visit. We found ourselves at urgent care on a holiday weekend, feeling such an absence of belonging.

That first winter was the worst. I watched people saying hello to friends and family in the grocery store and no one was familiar to me. The days were getting shorter, Chicago winter was looming, and I felt desperately alone. I stayed connected to friends in Colorado and watched on social media as they continued to meet up. Life was moving on without me there. During my first few visits back, I felt like a stranger in my own land. I didn’t belong in Colorado anymore and didn’t really feel like I belonged in Chicago.

With this move, I learned that it takes about fifteen to eighteen months to start to feel settled. I learned that it takes two years to make new memories and traditions. It takes four years to feel completely settled. Now at ten years, life in Colorado feels so far away. My life in Chicago is so grounded in strong memories and solid friendships. I frequently run into neighbors and friends at the grocery store.

And yet the energetic ties to Colorado remain strong. I still dream about our Colorado house regularly. Often, those dreams are about moving back. Our house was bought by a contractor and demolished. So there is no going back. A new house stands where our house once stood. I feel guilt over this, knowing what fate awaited our house once we decided to move. I willingly killed my house and that’s never not hurt.

I also dream frequently about Atlantic City, especially when I’m stressed. Those dreams are more about the beach and the city and less a particular house.

Will Park Ridge be the last place I’ll call home? I can see myself staying and really like the idea of nesting here until the end, but it’s hard to believe that will happen. There will likely be other adventures on this trip called life. They are hard to predict but, for me, it’s impossible not to heed the call when they come.

For now though, home is where my stuff, my husband, my daughter, and our pets happen to be at any point in time. And I’m happy.