The Consciousness of Ideas: Big Magic and the Creative Process 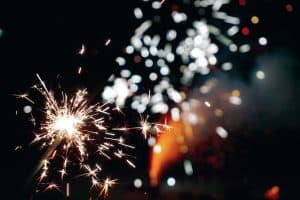 What drives ideas? What creates … creativity? Do ideas exist and then enter our minds to be sculpted into a form, be that a manuscript or a canvas or any other creation? J.K. Rowling has said, “Sometimes the ideas just come to me. Other times I have to sweat and almost bleed to make ideas come. It’s a mysterious process, but I hope I never find out exactly how it works.”

What would it mean to truly understand the creative process? All religions, at their roots, are attempting to put structure around the unknowable, imbuing chaos with certainty and rules. Our human nature doesn’t like to dwell in the space of uncertainty. Yet the germination of creative inspiration remains a mystery.

Elizabeth Gilbert’s book, Big Magic, finally labelled and gave structure to a phenomenon of the creative process that I’d wondered about for years. She writes, “I believe that our planet is inhabited not only by animals and plants and bacteria and viruses, but also by ideas. Ideas are a disembodied, energetic life-form. They are completely separate from us, but capable of interacting with us—albeit strangely. Ideas have no material body, but they do have consciousness, and they most certainly have will. Ideas are driven by a single impulse: to be made manifest. And the only way an idea can be made manifest in our world is through collaboration with a human partner. It is only through a human’s efforts that an idea can be escorted out of the ether and into the realm of the actual.”

The catch with the notion of “big magic” is that ideas don’t wait around. If you dawdle, the possibilities for manifestation will seek a new host. Sound crazy? Hear me out.

My first memorable moment with “big magic”—the notion of ideas being real and having their own lives—happened in college. I was working on my final thesis project for my senior-year creative writing class, a 55-page screenplay called The Elite Fate. In my movie, Adrian and his fraternity brothers are smoking pot one night and, in their untethered state, begin a round-robin discussion of the unique ways they would commit a murder. Weeks later, it’s Halloween and their fraternity is hosting a haunted house. By the end of the night, one of their group is found dead in exactly one of the ways described that fateful night. Everyone who participated in the murder discussion was also working at the haunted house. Someone in their group was very likely the killer but who and why remained an unfolding mystery. My screenplay included forbidden same-sex love and unrequited crushes. I’d have to dig up my dot-matrix copy to remember more than that. At the time, I truly believed The Elite Fate was the best thing I could ever write. The story felt channeled from the creative gods. I would write in the basement computer lab of my dorm, desperately pounding the keys on my keyboard, trying to keep up with the story being dictated from creative source.

You can imagine my surprise when that same year, 1992, someone told me that my movie was just like a new bestseller The Secret History by breakout author Donna Tartt. This is the description of Tartt’s novel on Amazon:

“Under the influence of their charismatic classics professor, a group of clever, eccentric misfits at an elite New England college discover a way of thinking and living that is a world away from the humdrum existence of their contemporaries. But when they go beyond the boundaries of normal morality their lives are changed profoundly and forever, and they discover how hard it can be to truly live and how easy it is to kill.”

The similarity of our stories had me spooked. How on Earth was Tartt’s book coming out just as I was finishing my screenplay? At the time, I didn’t know “big magic” was a thing. It was a long time ago.

Flash forward: It’s 2007 and I’m attending a writers’ retreat in Colorado. During the first few hours, I strike up a conversation with another attendee and describe my novel Missing Tyler. I explain how my story tracks a 15-year-old girl whose twin brother has died and how she navigates the loss. During the arc of the story, she falls in love with her brother’s best friend. I asked my fellow attendee what her book was about. Do you see it coming? Teen death and grief, over the summer, and an illicit love with her best friend’s brother. We’d written eerily similar books. At the time, we laughed about it. What were the chances, right? The punch to the gut landed very soon after the retreat when I read that Sarah Ockler’s agent sold Twenty Boy Summer as part of a six-figure, two-book deal. In the precious literary lottery, she had won. She had finished her book sooner than me and thus had first crack at getting the story to market. We both had received the same “big magic” gem from the universe. But she was ready to act on it while I wasn’t quite there, dragging my feet on years of revisions for a book I’d spent far too long on and that was still nowhere close to done. A few years later, when I was ready to publish Missing Tyler, my agent mentioned that she was submitting the manuscript to Little Brown. I predicted that we’d likely get rejected as my novel was too similar to Twenty Boy Summer. I was right: that is almost exactly how the rejection letter reads. My story was the type of book they like to offer, they wrote, but the books were too similar to publish so closely together and they couldn’t take me on.

I now look for the “big magic” threads that are continually occurring. These books, all published within five years, explore the theme of multiple existences and realities, and are oddly similar even as they’re magical in their own ways: The Midnight Library by Matt Haig; Belzhar by Meg Wolitzer; The Invisible Life of Addie LaRue by V.E. Schwab; and The Starless Sea by Erin Morgenstern. Read them and see if you can spot the alternate reality “big magic” thread.

Knowing about “big magic” has truly helped me understand the creative process. And not just with my own work. I’ve seen “big magic” happen with friends—multiple times, actually—who discovered published novels advertised in magazines and on shelves at bookstores while we’re workshopping rough drafts of their stories in a writing group.

In Gilbert’s book, she mentions her own experiences with “big magic,” specifically a story about the Amazon rainforest shared between her and Ann Patchett—and others? Who knows?

I’ll leave you with this: The universe doesn’t fuck around. If you don’t act on your creativity, it will gift the idea to someone else. Ideas need to exist, and they will find their vehicle. We are all merely scribes for the muse of “big magic.”

What story has been calling to you to be written? What painting painted? What song sung? Are you ready to get to work and manifest your creative ideas into form? “Big magic” is waiting for you.