Travel Outside Your Comfort Zone: An Ode to Mexico City 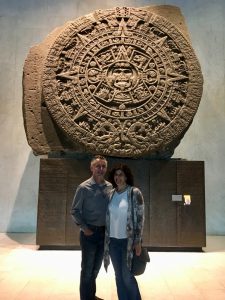 For our 20th wedding anniversary, we were looking for a trip of a lifetime. We wanted to commemorate the achievement of making it through the years together, a trip that could serve as a true celebration of our relationship. My mind drifted to visions of Europe, spots I’d been before and loved (France, England, Germany) and places I hadn’t yet been able to explore (Italy and … well, Italy!).

While brainstorming, my husband suggested Mexico City. I thought he was joking. Who travels to Mexico City? The images that Mexico conjured for me were foreign, impenetrable lands deep in trouble: gang wars, violence, poverty, a wasteland.

Why not just go to Europe, I pressed. In Mexico we could get kidnapped, robbed, maimed … killed. The risks were too high. He thought I was overreacting; people do actually vacation there, he assured me.

My husband and I are Mexican food foodies, a love that was cultivated by living out west for 20 years. We’ve dined ourselves stupid in Santa Fe too many times to count and we’re groupies of Rick Bayless and the Chicago culinary empire he’s built. We’d spent too many milestone meals at restaurants in the States, he said. For our 20th it was time to go to the source.

We’d “done” Europe multiple times together, and as much as we’d both loved every trip, traveling there again wouldn’t be stepping outside of our comfort zone. We needed to go someplace new where the experience would be completely foreign to us both. It was time for a true adventure.

He was right. If we wanted real Mexican food, that was the place to go and I agreed that we were in need of an adventure. But Mexico City continued to feel like a heavy lift. We proceeded anyway, purchased our tickets, booked a hotel; the wheels were in motion, even though I was unbelievably unsure.

Many times, I almost insisted we cancel the trip. My inner wimp was fighting hard. I couldn’t stop worrying that it was all a terrible idea and that I was risking a bit of adventure at the possible expense of never seeing my daughter again. Was it selfish to want to go? Did I even want to go? Not really.

We faced a slew of sarcastic “Good luck!” wishes from some friends and heartfelt pleading in other’ eyes when we told them of our travel plans. It all took a toll.

I fretted. I lost sleep. I consoled myself. I trusted him and I wanted to stand up to him. I almost didn’t go.

And that would have been a huge mistake.

What I found in Mexico was so very different than the picture my friends had back home. The Mexico I experienced was not the image I had conjured from folklore and dated media stories.

Following are just some of the realities we experienced in traveling deep into the heart of Mexico, spending ten days between Mexico City and Puebla, one of the country’s other largest cities.

Our takeaways from Mexico: The people are kind and they exude hospitality. When we apologized for not speaking their language, they jumped in with whatever English they knew. We felt comfortable, safe, and relaxed. It was a truly wonderful vacation and cultural experience.

This trip was a good reminder for me that we all need to travel outside our comfort zones way more often. I was ignorant to the realities of Mexico before traveling. Because I summoned the courage to go, my eyes were opened to a wonderful land of kind people, rich with history and tradition … and, of course, the best Mexican food I’ve ever had in my life.

When we travel, we usually discover that the other side isn’t much different from us, that our worries are unfounded, steeped in fear and ignorance. I hope that I continue to be brave and travel outside my comfort zone. There is so much of this world yet to see.